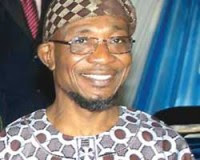 SIREN blaring ambulances, skip eaters in the toe while a state chief executive is sealed!

The natural thing is to do a panoramic view of such a place, look for a possible exit route and possibly beat it. Not even at this time of adverse security challenge in the country.

Just when you are trying to get out of the flux, behold, amid a hail of dust ambulances and compactors came to a halt. One after the other, to the surprise of onlookers, women drivers started alighting from the vehicle and heading straight to the dais to salute Osun State Governor, Rauf Aregbesola.

Indeed, Bimbo Olasoji, a female driver of one of the ambulances started out with the ambition of securing white-collar job in the state having graduated at the Osun State Polytechnic, Iree, with lower credit in Business Administration.

Having sat at home waiting for the elusive job, with hope almost fading, she reluctantly opted to join the then newly created Osun Youth Empowerment Scheme (OYES), at least, according to her, "to give a semblance of dignity."

Today, Bimbo, like the others who joined this scheme, has been transformed to a paramedic with a full-time job as driver and caregivers in case of emergency.

When asked what motivated her to venture into a job usually meant for men folks, Bimbo said: "I joined O-ambulance because I have passion for driving and saving lives. Though I did not study health-related course, I have been trained to attend to emergencies."

"Bimbo is not the only OYES cadet that has been transformed. Abdul-Azeez Yusuf from Egbedore Local Government, hitherto unemployed is today by all standards, an entrepreneur.

Indeed, watch closely the jungle boot when you see a military, paramilitary and voluntary organisations, you are likely to see one made by Yusuf among varieties he is producing.  Also, if you see Aregbesola kitted in football jersey for a novelty match, his soccer boot is made in Nigeria, courtesy Yusuf. Reason: He actually presented a customized pair to the governor at the OYES parade on Tuesday.

A part from being an entrepreneur, Yusuf is today training about 20 apprentices and, according to him, if the resources are available, he hopes to accommodate up to 80 or 100 more.

What could be more fulfilling than seeing your baby nurtured to adulthood? This captures the mood of the governor at the National Youth Service Corps (NYSC), Orientation Camp, Ede, when he set aside protocol, sang and danced to the admiration of the cadets dignitaries and other well wishers.

A programme written off by Cynics at inception is today the toast of other governors and even the World Bank could not but commend its replication in other states as antidote to poverty and employment.

The big question, however, is if other state governors could let go N200 million on monthly basis from their security votes to support such programme, what will become of unemployment in Nigeria?

But that has been the forte of Aregbesola in the last two years and he is not relenting, as according to the Chairman, OYES Implementation Committee, Femi Ifaturoti, said another batch of 20, 000 will take their turn in February.

While Governor Aregbesola presided over a colourful programme to mark their engagement, the state government disclosed that no fewer than 18,000 of them had found one form of job or the other to keep them out of the unemployment market.

The Governor, who spoke before a crowd of stakeholders and visitors from the Federal Capital Territory, members of the Course 35 of Command and Staff College, Jaji, and others, observed that the OYES has become the foundation of the development and revolution started two years ago in the state.

Aregbesola said that the scheme has in a short period of time become an astounding success, saying the government has the evidence of its success when the World Bank recommended the scheme for study and adoption by other states for public sector mass job creation and youth engagement.

In an address he titled "We are Simply Unstoppable," Aregbesola said "We are happy to announce that this effort is already yielding positives fruits in numerous areas where about 18,000 of the cadets passing out today have found permanent job placements.

"At the newly established Oloba Farm, OYES volunteers are engaged in cattle and ram fattening and in the broiler out-grower scheme."

He disclosed that OYES is a programme like no other, which instead of being a white-collar or blue-collar job scheme, was uniquely conceived and designed to take the youths in the state off the streets, give them an orientation about public service and the need to contribute to the development of their society.

According to him, skill trainings for the cadets were also incorporated which involves partnerships and collaborations with the private sector and academic institutions, such as Obafemi Awolowo University, Osun State University, Joseph Ayo Babalola University, Fountain University, Adeleke University and some other private training and development organisations.

The governor said this is why the scheme is a stop-gap scheme to train the youth and imbue them with positive work orientation and ethics such as self-sustenance, resourcefulness, character and competence, and to give them the self-confidence to forge ahead and overcome life's numerous challenges after they must have spent two years and be ready for disengagement.

Aregbesola continued: "Two years after, we can now proudly say that our dream has been realised. After the orientation and passing out, the cadets were deployed into various areas of public needs such as public works, sanitation monitoring, paramedics, sheriff corps and traffic marshals.

"Along the line, they were also trained in entrepreneurship and in different vocations of their choices so as to give them what it takes to be on their own and be the masters of their own destiny.

"I must also let you know that OYES is not about youth employment alone. It is also about re-inflating the economy of the State.

"Every month, the N200 million allowances paid to the cadets sink into the economy of the State. Our backward integration policy requires that all the uniform, kits and equipment used by OYES be obtained from the markets spread round all the local governments in the State.

"This has created value chain, improved the economy of the State, empowered families and created wealth."

He described the passing-out parade as a defining moment towards development and progress as the first batch of OYES volunteer cadets disengaged.

He noted that his administration is certain that the cadets are marching onto greatness, self-fulfillment and self-actualisation, adding that they are another testimony to the fact that the march of progress the state embarked upon last two years is unstoppable because it is backed up by vision, passion and action.

At the event on Tuesday were the Governor's wife, Alhaja Sherifat Aregbesola; Secretary to the State Government, Alhaji Moshood Adeoti; Chief of Staff, Alhaji Gboyega Oyetola; members of the Executive Council, traditional rulers, religious leaders, leaders and members of various trade organisations and others.

Ifaturoti added that 200 of the cadets had been selected to travel to Germany for a two-year intensive training on agriculture and soil management adding that three others have been trained and participating in the manufacture of the first locally manufactured hydro turbine for generation of electricity under a partnership by UNIDO /NASENI/the state government.

He said,"500 are in Odua farmers' academy for training in modern agricultural practices and 2100 were trained under OYES-TECH public private partnership with RLG to manufacture mobile telephones and laptop computers at their factory currently being set –up and to provide after sales support and services.

"182 OYES trained paramedics, 173 are deployed to O-Ambulance scheme and 2 are call-tracking personnel in the Min of Health. 1501 with teaching qualifications are about to be engaged by SUBEB and being posted to primary schools while more than 600 OYES are to be trained and engaged through the state's Emergency Call Service operations as call operators, emergency service providers and system engineers.

Ifaturoti noted that more opportunities abound for the volunteers, who apply diligently adding that successful service in OYES is a demonstration of readiness for greater calling.
Sent from my BlackBerry wireless device from MTN