GOMINA KAYODE FAYEMI IS REALLY MOVING IN EDUCATION BASED ON THE AWOLOWO VISION TO EDUCATE THE MASSES!- GOOD THINGS ARE HAPPENING IN NIGERIA WITH NEW GOOD LEADERS MOVING TO SERVE THE PEOPLE IN EDUCATION,AGRICULTURE,TOURISM,ROADS,ECONOMIC DEVELOPMENT AND THIS INCLUDES GOMINAS IN OSUN, EDO,ONDO,RIVERS,LAGOS, IMO STATES WHO ARE CREATING A REVOLUTION IN GOVERNING Besides renovating schools, the governor also came up with the idea of putting a laptop on the desk of every child in the state. When he mooted the idea, not a few people were unconvinced. Many were even suspicious of the governor’s intentions. But Fayemi, a product of the esteemed Christ’s School located in the state capital, was determined. He said by 2014, no fewer than 100, 000 children would have benefitted from the computers. Already, 33, 000 laptops have been distributed free of charge to students. The governor said the importance of the distribution of the laptops could not be exaggerated, saying they would assist the students get introduced to the modern trends in information technology.
“The laptop initiative is not an end in itself,” the governor explained. “It’s a means to a better end in which our children would be competing in a world that they do not make, in a world in which the children that they are dealing with globally are also playing in that field or in a much more sophisticated field. And we started this before WAEC introduced ICT into the curriculum, which is now a compulsory subject. If you want to do some national exams now, you must do it online, via the computer. So, it’s like we anticipated this.”
By TOPE ADEBOBOYE
Posted by YEYE AKILIMALI FUNUA OLADE at 6:26 AM No comments:

NIGERIAN SURPRISES- GOMINAS WHO ARE WORKING TO SERVE THE MASSES- EKITI GOMINA GIVES OLD PEOPLE MONEY-SOCIAL SECURITY-EVERY MONTH!- GOOD THINGS ARE HAPPENING IN NIGERIA- HE IS NOT THE ONLY GOMINA WHO IS DOING SO- OSUN STATE GOMINA AREGBESOLA IS GIVEN HIS "AGBA OSUN" N 10,000 EVERY MONTH!-FROM SUN NEWSPAPER,NIGERIA By CHARLES ADEGBITE
This article was first published in The Sun on 15 October 2012.
Posted by YEYE AKILIMALI FUNUA OLADE at 5:48 AM No comments:

SPEAK YORUBA ONLY AT HOME, BRIBE YORUBAS TO SPEAK UNDILUTED YORUBA BY HAVING BEST YORUBA SPEAKING CONTESTS ALL CLUBS,SCHOOLS,ORGANIZATIONS WILL SPONSOR WITH BIG MONEY PRIZES,SET UP YORUBA SCHOOLS TEACHING ALL SUBJECTS IN YORUBA,PROMOTING ALL YORUBA CHURCH SERVICES-SAVING YORUBA LANGUAGE- MY ARTICLE IN OYO EXTRA NEWSPAPER,NO. 1,2012 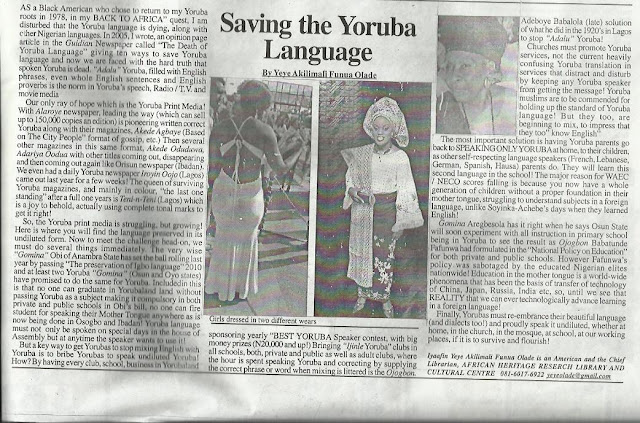 …Sports Minister, others to attend
By GBOLAHAN DADA
It’s now official. Yes, the wedding bell is ringing loud for Paralympic Games stars, Folashade Oluwafemiayo and Tolulope Owolabi, as they have picked November 3 to tie their nuptial knot in Jos.
The much talked about wedding is expected to attract top officials in the sports circles, including the Sports Minister, Mallam Bolaji Abdullahi; the Director of Sports, Dr Patrick Ekeji; Nigeria’s Paralympic Games Chief-de-mission, Dr Simon Ebhojiaye; the National Paralympic Secretary in Nigeria, Dr Frank Thorpe and all the coaches and officials who were among the Team Nigeria to the London 2012 Games.
According to the bride, Folashade, all her team mates are also warming up to be part of the history-making wedding as they have already bought uniform popularly known as ‘Aso Ebi’ with head ties for women and caps for men. “Everybody is excited about the date.We have been trying our best to put things in proper perspective towards a succeessful ceremony. My husband is in Lagos to tie-up things concerning our wedding. We believe God to ensure a hitch-free ceremony on November 3.
We thank God for the interest and support already shown by people so far and we are grateful for everything,”she said. Folashade disclosed that she could no longer wait for that day to come to pass as friends and family members are daily thronging her home for an update on the wedding.
“It is a thing of joy as everybody wants to participate in one way or the other. We are all involved in the project. My friends, relatives, in-laws are deeply in it and God has been so faithful,”she told Daily Sunsports on phone from Jos. Folashade and Tolulope had their traditional engagement in April, a few months before the London 2012 Games.
Although, Tolulope didn’t win anything at the Games, Folashade won a silver medal and set a new world record and Paralympic mark.
Posted by YEYE AKILIMALI FUNUA OLADE at 5:32 AM No comments: