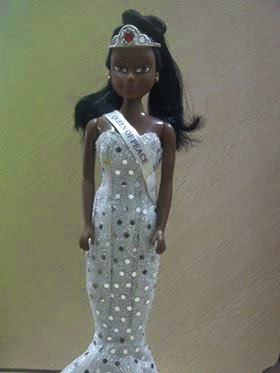 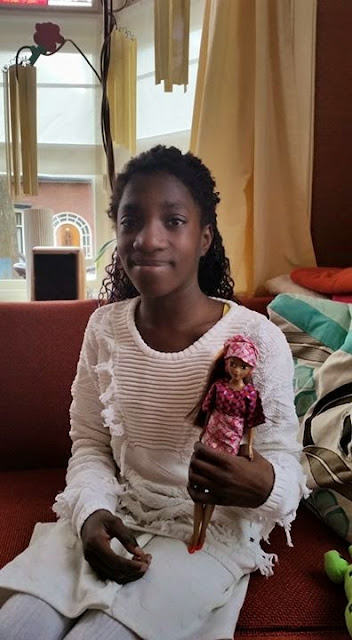 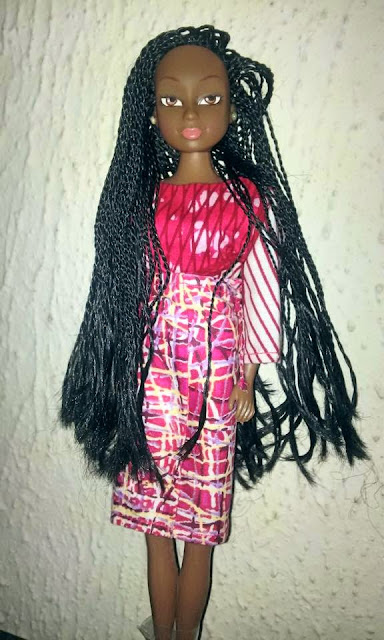 
178
View comments
A man who couldn't find a black doll in the shops as a gift for his niece decided to take matters into his own hands.
In 2007, Taofick Okoya, 43, created his own doll that Nigerian girls could identify with by recreating their skin colour and style - and it is now so successful that it is outselling Barbie.
The doll, which is called Queens of Africa, comes with traditional outfits and accessories and costs around £4.50.
Scroll down for video

A Nigerian businessman decided to create  own doll that Nigerian girls could identify with called Queens of Africa, by recreating their skin colour and style - and now it's outselling Barbie in his native country
The dolls' look is modelled on three of the country's biggest tribes and aims to promote strong feminine ideals, like love, peace and endurance.
The doll is now so popular that, according to Reuters, it is selling up to 9,000 units a month - a staggering 15 per cent of the country's toy market.

Share
But the Queens of Africa aren't just selling in their home country.
Thanks to the doll's online presence, customers are coming from as far as America, Brazil and Europe.


Taofick Okoya explains why 'Queens of Africa' are so important +5
Thanks to the doll's online presence, customers are coming from as far as America, Brazil and Europe +5
The doll is now so popular that, it is selling up to 9,000 units a month - 15 per cent of the country's toy market
Speaking to ELLE about his dolls out-selling Barbie in his native Nigeria, Okoya said: 'My mission is to make the Queens of Africa a symbol of hope, trust, and confidence by promoting African history, culture, and fashion.'
One person that Okoya really hopes the dolls will have a positive impact on is his daughter, who, he explains, once wished she was white. +5
Okoya said: 'I don't believe Mattel sees the Nigerian market as a priority, yet their product has great influence on the psyche of the children here and affirms certain values contrary to our society'
He explained that even though they live in Nigeria, there was a lot of Western influence. He said: '[This] might have been responsible for her wishing she was white. It made me aware that I needed to make her proud and happy being a black African girl, and not limit it to her alone as this was a common trend among the younger generation. The Queens of Africa became a platform to achieve this.'
Unfortunately, Okoya has been told that he won't be able to sell the dolls on the shelves of mainline stories in America and will have to limit his business to specialist stores.
But he is determined to see the decision overturned, he said: 'I am looking to prove them wrong.'

Back to Album
Previous · Next

by Alexis C. Madrigal | April 26, 2015 2:56 AM
SHARE TWEET
On April 12, Freddie Gray got into a Baltimore police van, after being chased down and arrested by police. Thirty minutes later, he emerged with severe injuries that led to his death a week later.
There are many unanswered questions in the case, like why police chased him down and arrested him, when there is no indication that Gray was in the process of or had committed a crime or why they didn’t belt him into the van, as required by their own internal regulations. The Baltimore Sun has reported that Gray is not the only arrestee to have suffered serious injuries from a ride in a police van.
Like the police-involved killings of Oscar Grant and Eric Garner and Michael Brown—all young, black men—Gray’s death touched off a series of protests seeking justice and reform of police practices.
Baltimore native and self-taught photographer Devin Allen hit the streets to document the deep pain and righteous anger of his city. The photos he produced are searing, intimate, and remarkable.

A tear streams down a protester’s face as Freddie Gray’s friends and family address the crowd.

A father and son march on April 23.

Protesters scream “No justice, no peace” at an April 23 march.

A standoff with police during yesterday’s protests.

A protester kneels, hands up, at last night’s protest.

A protester chants during the week’s protests.

Protesters stand together blocking a street.

A peaceful conversation between protesters, media, and police on the front lines.

A march demanding justice for Freddie Gray on April 23

A crowd watches as someone smashes in a rear window.