POLYGAMY!-THIS SOUTH AFRICAN BROTHER MARRIES 4 BRIDES IN ONE DAY LIKE OUR GREAT NIGERIAN FELA DID! 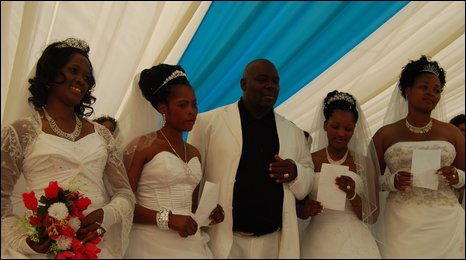 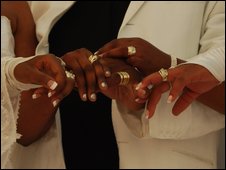 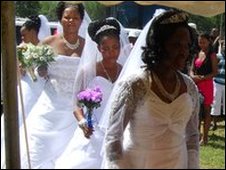 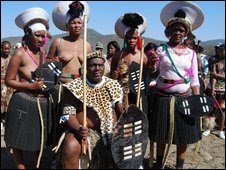 South African businessman Milton Mbele broke all the traditional rules of a polygamous wedding when he recently married four women on the same day.

The four brides dressed in flowing white gowns walked down the aisle together, before saying "We do" to the 44-year-old groom.

Mr Mbele says he didn't marry them purely for the spectacle but also because it made financial sense.

"I don't know how much four different weddings would have cost me but I know doing it all at once saved money," he explains.

"For example I only needed one tent, I needed to hire one caterer and one photographer for the entire ceremony."

"I began putting money aside for the event towards the end of 2007 and started collecting quotes for things like the tent and catering costs early last year."

He says he loves all his wives - Thobile Vilakazi, Zanele Langa, Baqinisile Mdlolo and Smangele Cele - equally and also treats them that way.

Mr Mbele himself wears four rings on his finger - he says this is a sign of his commitment to all his wives.

The wives say they were shocked by the news that Mr Mbele wanted to marry them at once but add that they agreed because they love him.

Some two weeks after their much publicised two-day ceremony, Mr Mbele says he is overwhelmed by all the attention his wedding has attracted.

I met Mr Mbele and Smangele, at 23 the youngest Mrs Mbele, at a hotel in Durban - the pair were set to do a radio interview with a national radio station the next day.

In their hotel room the pair sat comfortably on the bed while taking questions about their big day.

"This is a proud part of our culture. It has been practised for generations before us."

"My grandfather himself had three wives," says Mr Mbele, quickly adding that he isn't blindly following in his grandfather's footsteps.

"I prefer polygamy to having many girlfriends which is what some married men do," he says.

"If I love more than one woman, I would rather make it known to the other women in my life and make it official.

"If I feel like taking another wife this is something that will be in the open and my wives would know," he says.

But the practice has been met with criticism.

Some point out that it does not afford equal rights to men and women.

Women are not allowed to wed more than one husband, while a man can have as many wives as he wishes.

There are seven days in a week and I have four wives. I will take turns visiting them and use the remaining three days to rest

In a polygamous marriage only the first wife is legally recognised, which could pose some difficulties in dividing the husband's estate when he dies.

South Africa has the highest number of HIV-positive people in the world - some five million.

Since having more than one sexual partner increases the chances of contracting the virus, it is understandable that Smangele's family had reservations about her entering into a polygamous marriage.

"My family was not pleased at first but they came around eventually," she says.

They are taking the necessary precautions, which include regular HIV tests.

"I had my last test a few months ago when I was pregnant. We are all disciplined about staying healthy," she says.

The arrangements seem to have been carefully thought out down to the last detail, including how Mr Mbele will alternate between his four wives, who all live in different parts of northern KwaZulu-Natal province.

"There are seven days in a week and I have four wives. I will take turns visiting them and use the remaining three days to rest," he says.

At this point Smangele, who has been quiet with her head bowed until now, looks up and smiles at her husband.

When asked how she feels about Mr Mbele's visitation plan she quickly responds.

"I believe it will work. I am used to living on my own and having him visit me on certain days so this won't be anything new to us," she says, reaching for her husband's hand.

In fact, Mr Mbele has already been in relationships with his new wives for several years.

He also has three children from a previous relationship.

Mr Mbele is the breadwinner in all his homes - none of his wives is employed. They say they are happy to be provided for by their husband.

He owns 100 cows and 250 goats and has a good job, so he is relatively wealthy, at least by traditional standards.

'Why we love him'

Earlier in the day, I spoke to Baqinisile, who lives in a large home which she says was a gift from her husband.

The yard has three separate houses; the main house is made from orange bricks - it is the biggest and only one of its kind in the small village.

The Mbeles have postponed going on honeymoon to save money

She welcomes me into her home and ushers me to sit down on luxurious cream leather couches.

In an area where employment and the luxuries it affords are difficult to come by, Baqinisile is living a life some young women in the area would envy.

Baqinisile describes her husband, who she met in 2006, as a fair man.

"He respects us and treats us all the same way,"

"When he buys us clothes, he buys us similar things. Also when he gives us money.

"I admire this about him because it shows me that he loves us the same way," she says, adjusting her ring.

Both Baqinisile and Smangele admit they were against polygamy when they were growing up but have now changed their minds.

"When I saw what a loving man he is and how he much he values all of us, I knew that I would be able to share my life with him and everyone else," says Smangele.

Although Mr Mbele says he minimised costs by having a mass wedding, he is still paying for it, so there will be no honeymoon for a couple of years.

But the entire Mbele family will not be going away together - he will take each wife separately in order of their hierarchy.
Posted by YEYE AKILIMALI FUNUA OLADE at 8:25 AM No comments: