BLACK VIRGINS FROM SOUTH AFRICA EXPORT THEIR "REED DANCES" TO SWAZILAND!-BLACK VIRGINITY IS THE KEY TO THE SOLVING THE SUFFERING OF BLACK GIRLS WORLDWIDE! 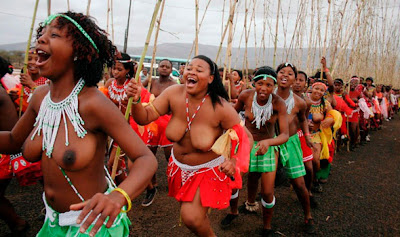 Virgins from South Africa’s Zulu Kingdom invaded Swaziland over the weekend, showcasing their cultural dances in the Mbabane Theatre Club on Saturday.
The showcase was part of the Ubuntu Production, which is done in collaboration between Port to Port Kult Unternehmen from Germany and the Theatre Club.
Ten artists from SA and 25 local virgins are auditioning for the production, and the idea behind the gathering was for the artists to get to know each other.
The girls’ aim was to promoted virginity testing as part of the battle against HIV/Aids. Many of the girls have just finished school, and some are at tertiary institutions, but they all insist that girls can abstain from sex until marriage.
The local artists of Swaziland shared the stage with South African artists, and offered performances in sibhaca, indlamu and other traditional dances. A stunning performance was seen by the People’s Educational Theatre and Masikane, and Prince Lungelo from the Zulu Royal Kingdom watched the show.
Posted by YEYE AKILIMALI FUNUA OLADE at 2:54 AM