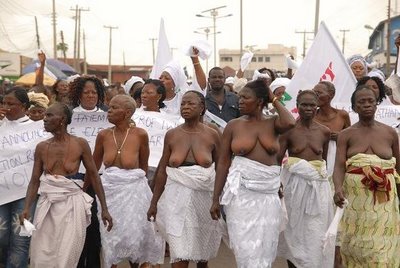 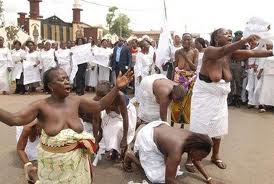 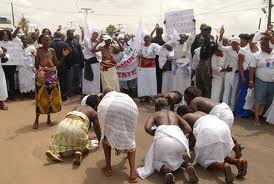 The run-off elections in Ekiti State might have come and gone, but one event in the whole political drama that would for a long time to come generate discussions would be the half-naked protest of the women.

It was like a script being played out of a Yoruba movie, but alas it was no play but reality, as the women, most in their twilight, marched out with their ‘twin flats’ (as they are no longer twin towers) in broad daylight to protest the state of the elections. Is it evil? Does it portend doom? What are the implications? These are some of the questions that will keep bugging us for a long time to come.

Speaking on the significance of the protest, an authority on Yoruba traditional practices, Chief Yemi Elebuibon, said it was an ancient practice, which women used to protest an anomaly in the society.

“In the olden days, when a king has fallen out of favour with the people, the women could stage the protest to oust that king. Usually the king would vacate the throne if the women carried out the protest but in most cases, what they usually do is to issue a warning or give an ultimatum to the authorities to correct an anomaly.

And when such warning goes out like that the authorities usually meet their demands without further ado.”

And for the Peoples Democratic Party members, who equally staged its own protest, wearing white and sprinkling salt on the streets of Ekiti, the Ifa priest said it held little or no significance. However the salt that was sprinkled meant that they were trying to neutralise whatever adverse effects the parade of the women would have caused.

“The fact they wore white was no big deal. But by sprinkling salt, they were trying to neutralise what the women did.”

However, he was quick to warn that the act (the women’s protest) in itself has grave implications if nothing is done to neutralise it.

“The implication of the women’s protest is dangerous for Ekiti as a state. It will affect the inhabitants greatly unless they do the correction to what they protested for.

Having other people wear white (what the PDP did) trying to counter the effects of the protest, will not wipe it off.

”In a place where tradition is held in high esteem, such efforts would be futile. As such a counter procession would not be allowed to be fruitful. It is one of the ways by which the people have their say.”

Going spiritual, the famous ifa priest, who distinguishes himself from a medicine man, was quick to give a relevant ifa quote, which are some sayings of the ifa deity.

“We say we are in a democracy. In the olden days, a monarch was rejected by a procession, and when all the women decide to go out naked, it means the situation had become unbearable. One of odu ifa eseogbe, explains it thus: Bi obinrin ba n gba ja meji meji ao sai mo pe eruru aye de adifa fun oosaala oseremagbo, nijoti o n lo ree gbe jojolo ni iyawo atile jojolo lo awoko wale.

It simply means that when a woman ties two sashes, there will be confusion on the earth.

“Ifa divination was performed for oosaala oseremagbo the day he wanted to take jojolo as a wife. He sent jojolo away and asked awoko to come home.”

”In this stanza of ifa, it simply says that people need to do things as ordered by God. Should they decide to do things the wrong way, it will only bring havoc.”

He further implored the Resident Electoral Commissioner, Mrs Ayoka Olusola Adebayo, to be consistent with her pronouncements.

“The Resident Electoral Commissioner needs to stay by her word. If she used her tongue to pronounce certain things and does otherwise, it is too dangerous. As a nation, we need to be careful so that we don’t destroy the nation the way our people behave.”
Posted by YEYE AKILIMALI FUNUA OLADE at 1:54 AM